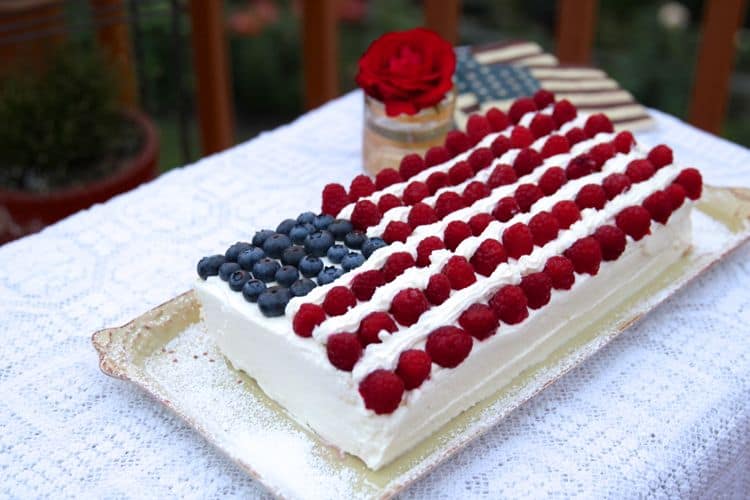 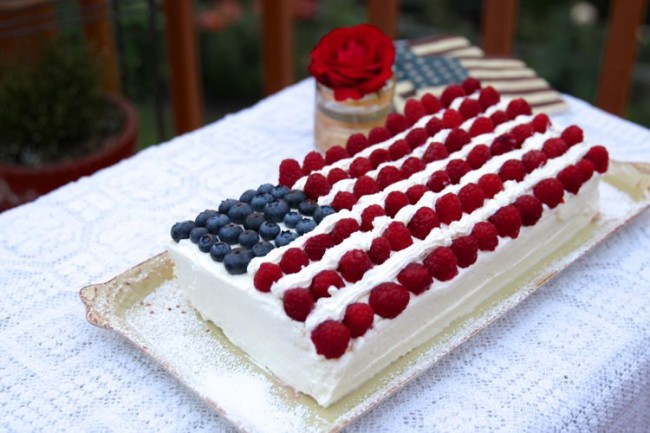 Happy *almost* 4th of July! Today’s recipe is not only for dessert lovers but also for fruit lovers. My two favorite foods. If you’re going to a friend’s house, this will be the cake to bring as it’s impressive and delicious. Growing up, my mom would periodically make this 4th of July cake and I remember thinking it was the coolest looking thing.

I still think so.
The ingredients are pretty basic and most importantly, there’s no butter! So I guess it’s healthy too. Whipping cream, you say? Well, that doesn’t count 😉 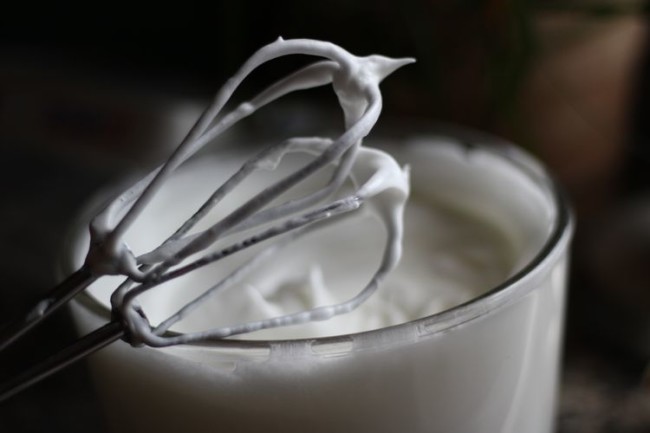 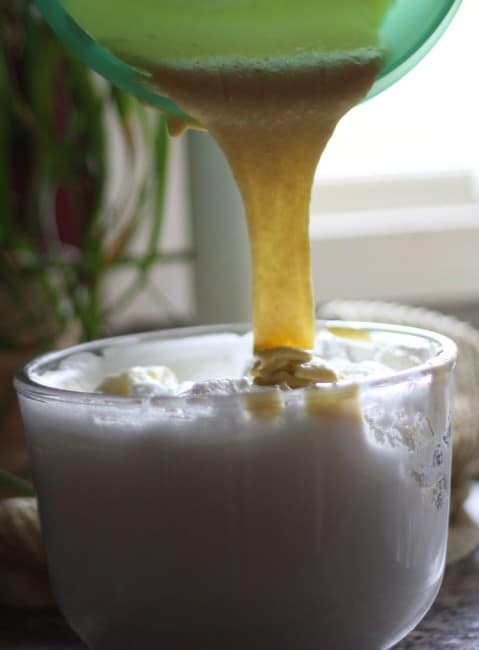 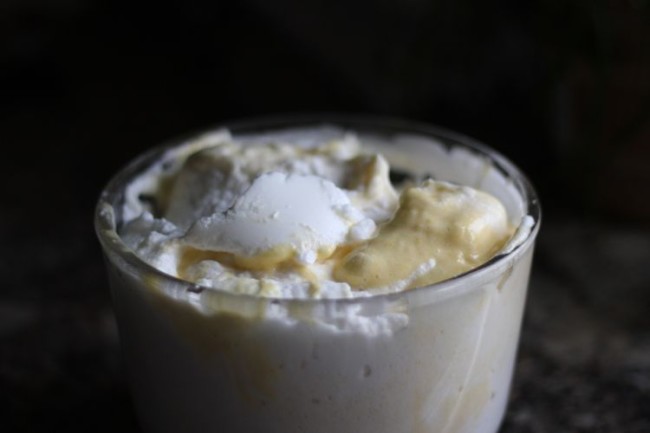 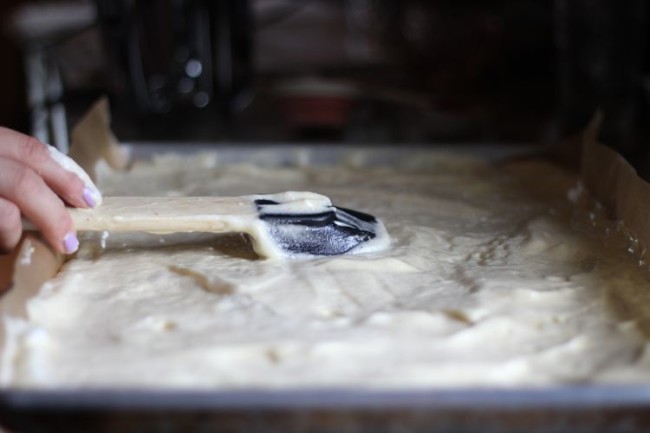 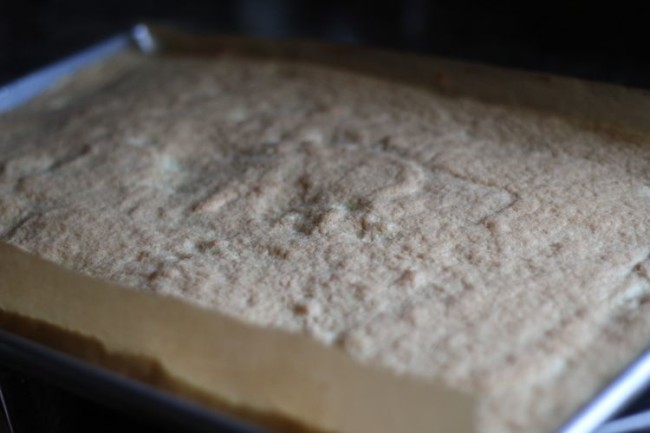 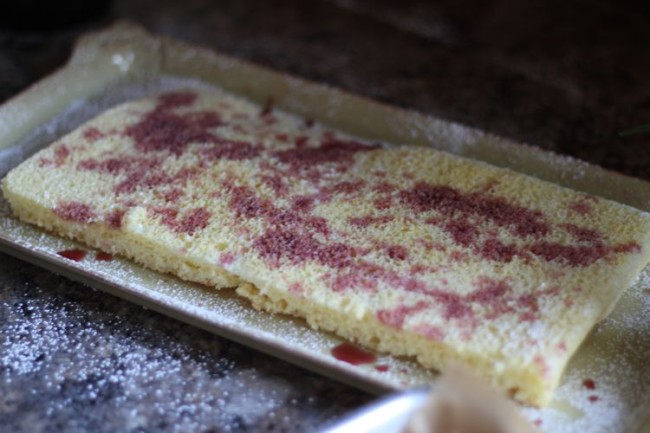 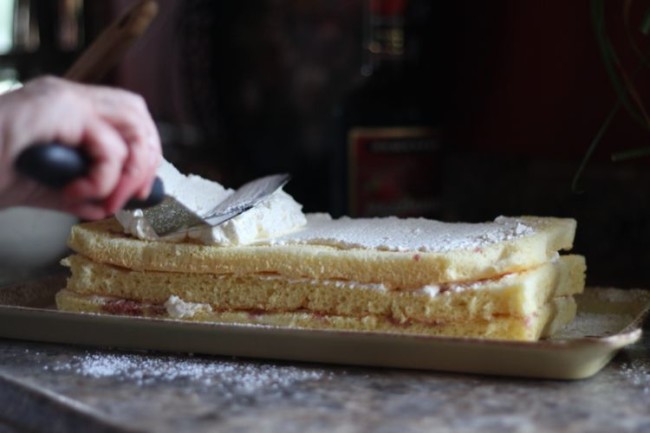 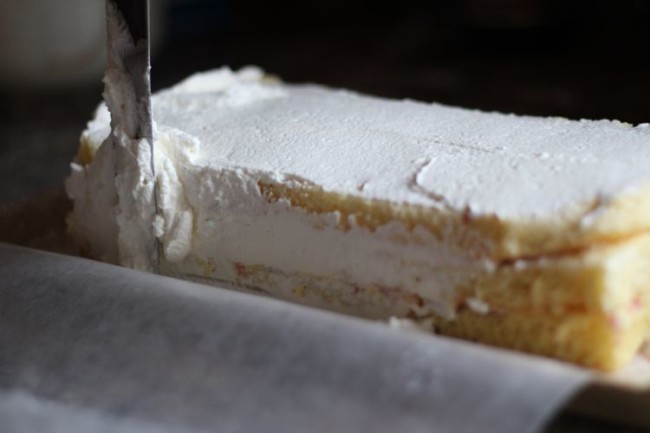 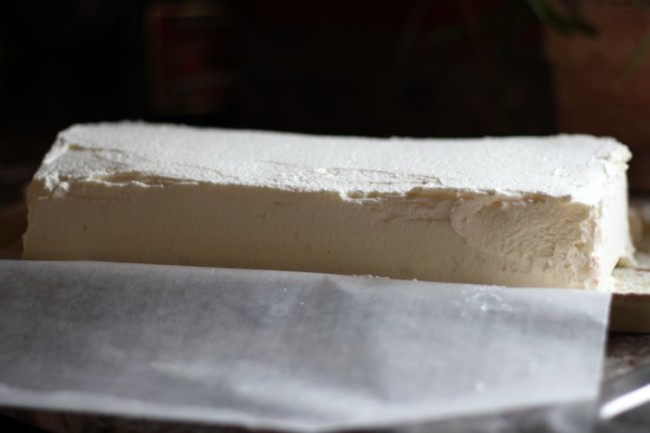 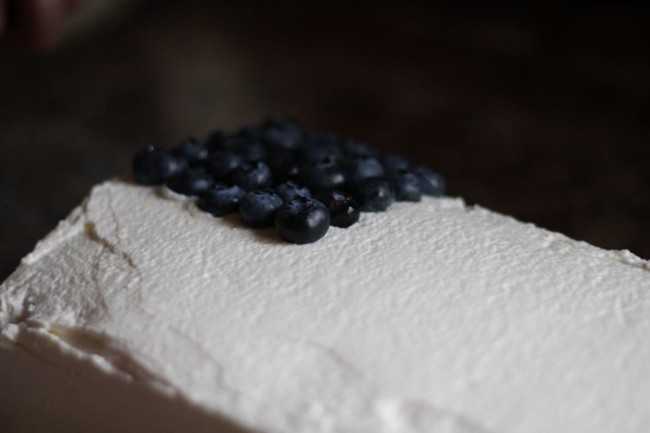 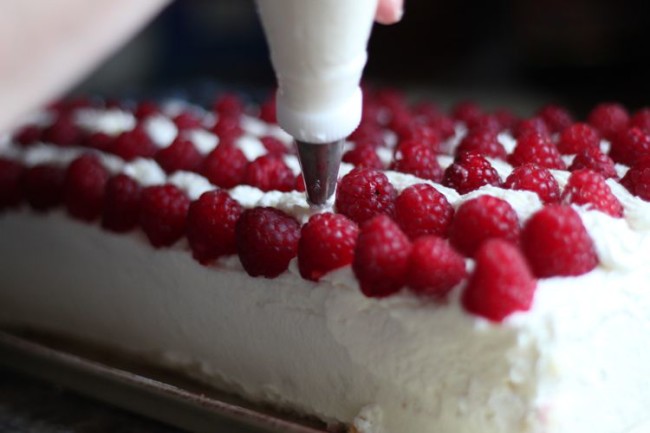 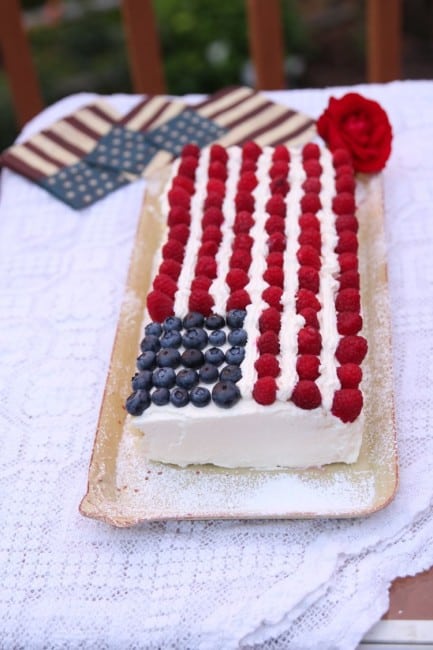 Place a large piece of parchment paper over a large cookie sheet (17 1/2″ x 13″). Gently spoon batter over top and smooth over. Bake for about 15 minutes or until golden brown on top. Turn oven off and open oven door. Leave cake inside until cooled.

Remove from oven and slice cake horizontally into three even pieces. Using the cookie sheet above, each cake piece will measure about 5 1/2″ x 13″ (see pictures for details).

Brush each layer with raspberry liqueur (about 1 T and 1 tsp for each layer).

Whip cream until foamy and beginning to turn into soft peaks. Gradually add sugar and vanilla and whip until peaks form, being careful not to over whip.

Place a layer of cake on the bottom of a platter. Spread with a little cream. Top with the second cake layer and repeat, taking care to reserve enough cream to ice the outside. Ice the top and sides of the cake. Top with blueberries and raspberries, using the blueberries as stars and the raspberries as the stripes.

Pipe icing between the stripes for added decor. 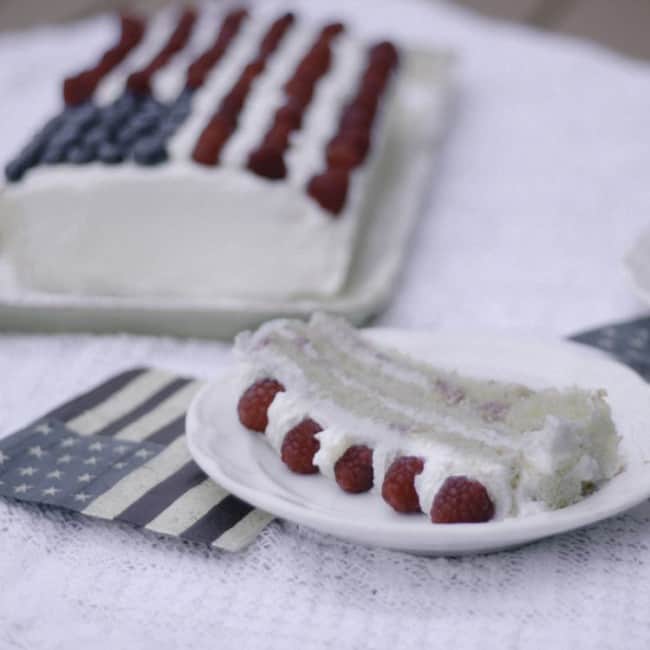 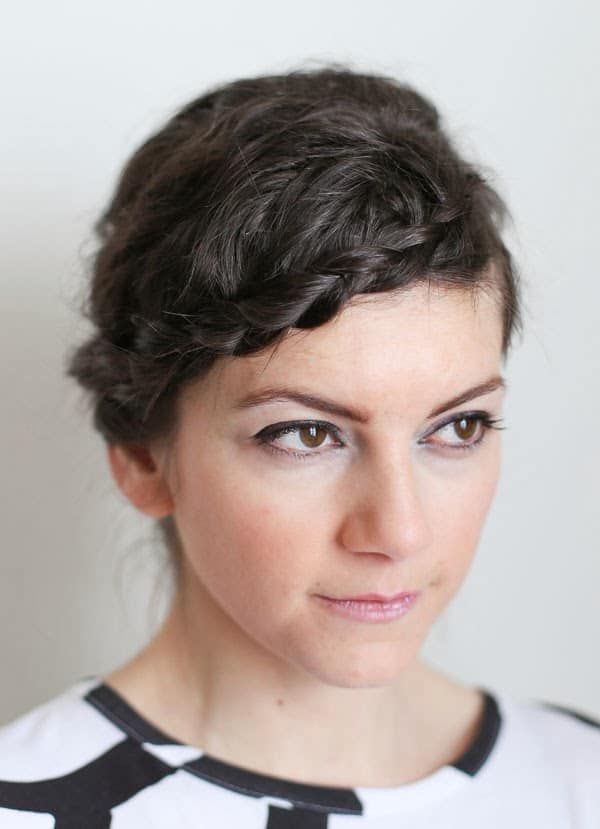 Ever since the first Fall 2014 images of beautiful models with their amazing hairstyles hit the internet, I have been working on recreating specific braided hairstyles. Since I have curly hair, my options of hairstyles tend to be limited and understandably, braids work best on my hair. This is a great braided hairstyle for second… 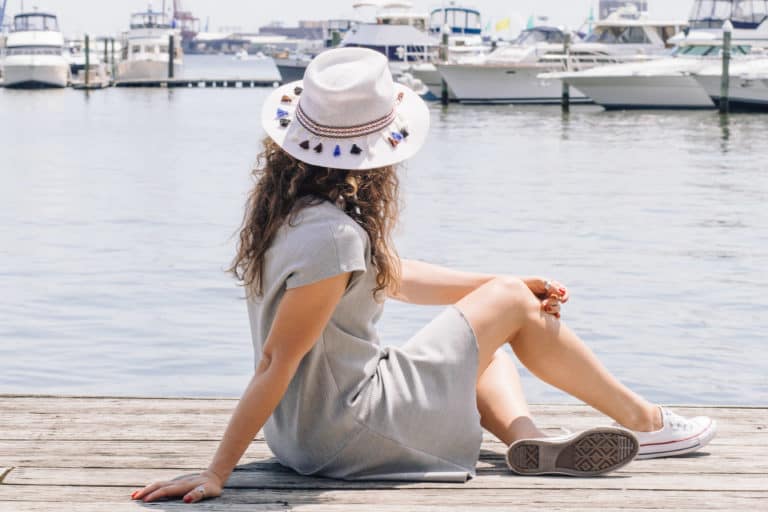 Two weekends ago my sister and I had a little staycation in Baltimore. We’ve both been to Baltimore many times, mostly the Inner Harbor but had never extensively explored Fells Point. So a weekend of exploration was perfect to get to know this quaint little part of the city. Baltimore is a pretty laid-back city;… 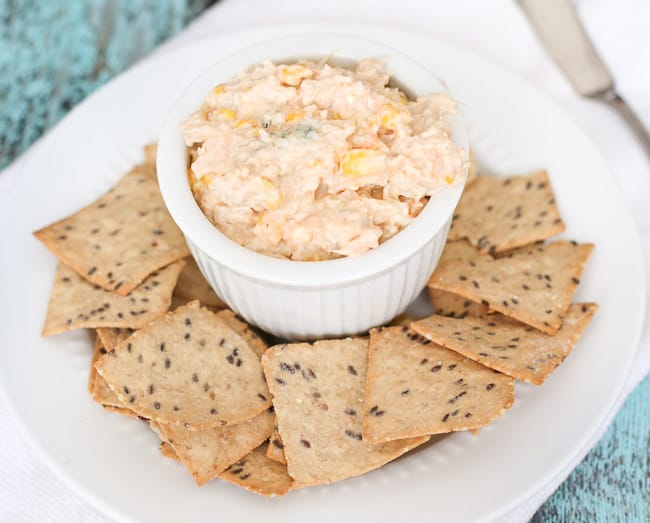 Isn’t it strange how you can eat a huge dinner the night before and still wake up starving, almost as if you hadn’t eaten much the day before? Of course, if you’re like me, you wake up hungry pretty much every morning, regardless if you ate a little or a lot. And since food is…

Seriously, how cute are these cups? Confession – I actually bought them for the blog alone. I realized I didn’t have anything fun to use for blog photos and who doesn’t need an extra dose of pizzazz in their life? But what’s more amazing are these parfaits. I have always been a fan of parfaits… 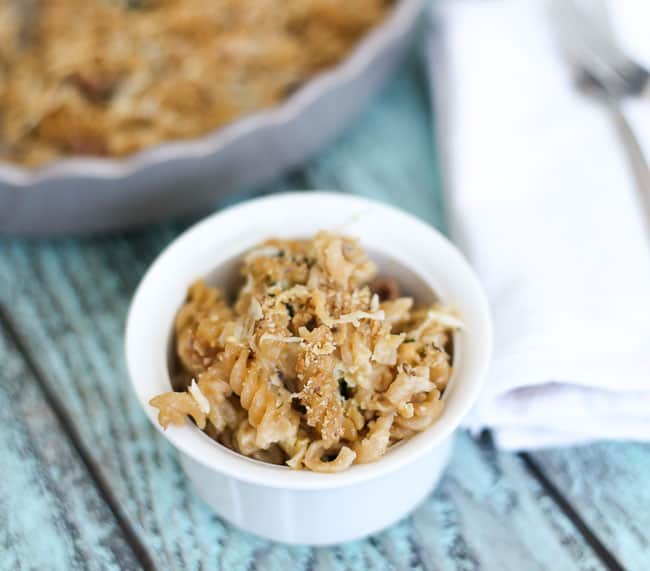 Can you guys believe how fast this week went? This month? We are almost to February and I feel like I’m so behind on everything. Story of my life. Let’s comfort ourselves with this mac and cheese. Ok. First, I need to share my love of mascarpone. This cheese is amazing. Yes, it’s expensive but… 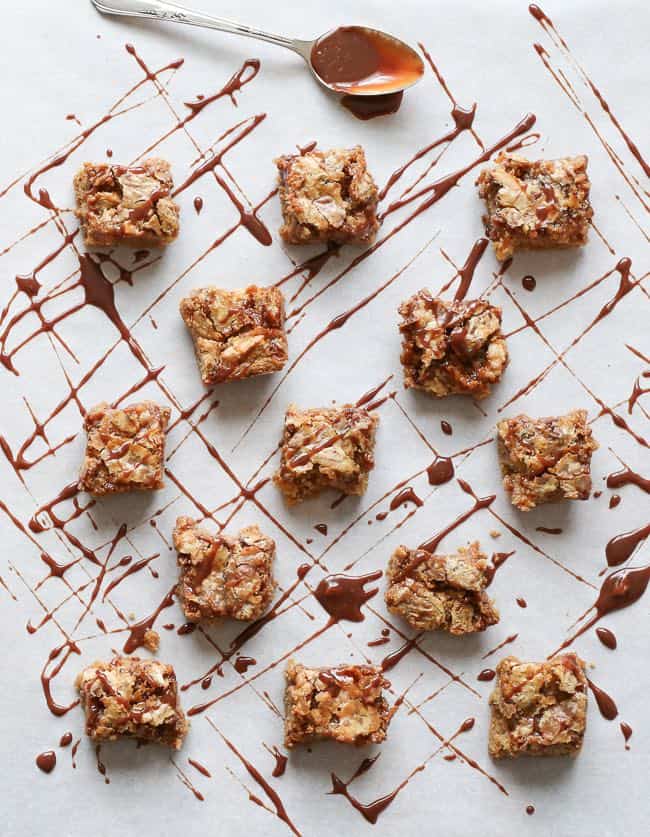 I take it ALL back. Every single time I have ever said I am not a huge fan of cookies was a lie, one that I’ve recently discovered upon making these out-of-this-world bars. This is Christmas cookie recipe #2 baked last week during my cookie-fest with my mom and sisters. But seriously. If you love…